In a digital area where we are just one click away from so much content, varying from comedies to talk-shows and dramas, horror content makes a good bunch of it.

And people enjoy this kind of content. A lot.

In 2018, ABC’s third annual Podcast Survey revealed that 44% of podcast listeners listened to true crime, up from 30% in 2017. The surge was the strongest with women. In a study on 4.400 respondents 18 years and older made by Statista and released in November 2020, True Crime came in third as the most popular podcast genre, just after Comedy and News.

As the horror genre goes, take It: Chapter One, for example, the adaptation of Stephen King’s novel. The film made more than $700 million at the box office worldwide. People loved it so much, they rewatched it, stuffing their mouths full of popcorn while little Georgie was crying on and on about his poor arm being ripped off.

According to Statista, from 2017 to 2018, the highest-grossing R-rated horror movies of all time in North America grossed over 1.8 billion dollars. 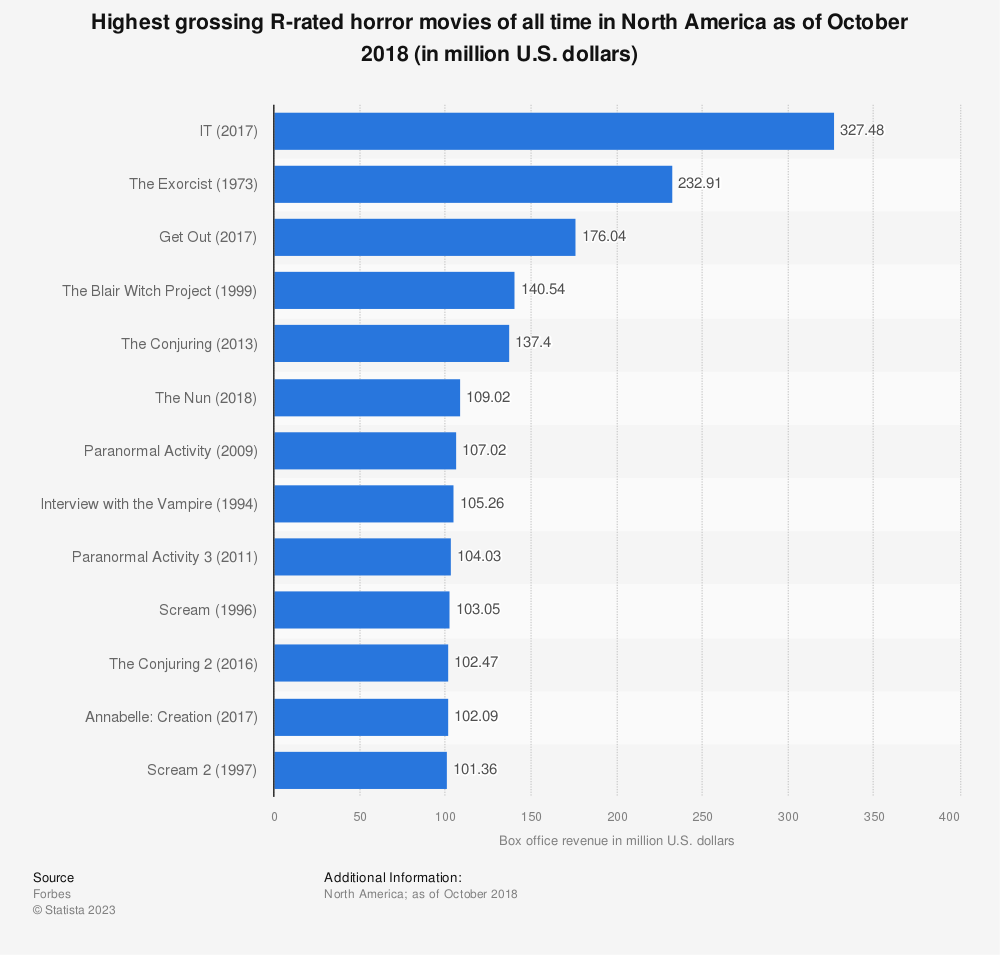 Larisa Moldovan, age 27, works a full-time job. Whenever she has a little bit of time, she tells me, she tries to squeeze in whatever kind of content that has to do with serial killer documentaries or crime mysteries.

Opening YouTube and typing in the search bar ‘Bailey Sarian’, I come across a YouTuber talking about unsolved crimes, all the while cracking jokes and putting makeup on her face. It goes on for a good half an hour in each video. Larisa recommended this to me, telling me I will love it. And I did. As someone who falls asleep listening to all kinds of crime podcasts, what wasn’t there to like? Bailey’s video from last week already has 2.8 million views. And that’s a 38-minute video.

The numbers are pretty good, given that so much content is being fed to us daily.

So why are people enjoying horror stuff this much?

“I have always been curious about what goes through their minds while they kill so many people.” Larisa types in our chat, talking about serial killers like it’s just another Wednesday. I crack a joke about how I hope the FBI agents tasked with watching over us are sleeping right now.

Unfortunately, I could not meet with her because of the pandemic context but the Instagram chat is as good as any to kick start what would be an interesting and, may I say, damning conversation. The three dots appear again and I stare at them, wondering what could top off her previous statement. She takes her sweet time, as I do sometimes when people ask me why I’m so obsessed with true crime podcasts. Most of the time I just shrug, like it is what it is.

“Ok, there are some people who are like, so fucked up, you know? People who get some sort of relief out of it. But the people that kill just for the hell of it?” She types an emoji that has its head blown apart and I get the gist, no need for more words. Because, well, that’s pretty much it, folks, that’s why people enjoy this kind of genre so much. We don’t get it, we can’t really relate to serial killers but we sure do enjoy trying to understand them and everything else in the process.

“It’s like, most of them don’t have trauma or an awful childhood experience. The fact that they are so fascinated about draining the life out of somebody just because, that’s what fascinates me.” Larisa continues. I ask her if she chases the fight-or-flight response that is usually triggered into us, or if she listens to this genre for tips and tricks, like let’s say you want to know what could happen so you’ll be prepared. She denies. For her, it’s just fascinating.

And it’s a good reason. It’s such a good reason, that there are millions of people who consume this content daily.

“I think it’s also about satisfying some morbid curiosity, something we all naturally have.” Mihaela Zotica, aged 28, tells me. Mihaela usually listens to true crime podcasts when she runs errands or cleans the house. It relaxes her and she can focus better on the task at hand with a true-crime story in the background.

“I think it helps me detach myself from the monotony of the things I have to do and at the same time it creates a state of involvement for me,” she continues.

It’s also really interesting how most of the true-crime podcast listeners are females. Mihaela is attentive to the tips and tricks that one could find in documentaries or podcasts. “I think about what I would do in a similar situation and how not to expose myself to such a thing. Fun fact, after watching a documentary with Ted Bundy in which he explains how he entered and killed some girls in a house because it had the doors and windows open most of the time, I avoided renting ground-floor apartments.”

So there it is, we have the tips and tricks, we have the morbid curiosity and fascination. What about the thrilling rush? What about the fight-or-flight response that usually triggers us? Or the desire to look away from a gruesome scene that’s taking place on your TV but you don’t because you know you’re safe, cocooned in your blankets, with your doors and windows locked?

Ana-Maria Ureche, psychologist and school counselor, doesn’t recommend horror content. She is of the opinion that the subconscious mind does not differentiate between what we imagine and what is reality.

“Watching a movie, especially a horror one, means letting yourself be carried away in a certain state, the body experiences all the action of the movie, even at a neurochemical level. The same goes for news that creates all kinds of anxieties.”

She continues with the fact that she does not agree with the statement that “some people watch this content to relax” because it is just an illusion of relaxation.

We’re consuming morbid, scary things in an environment controlled by us.

The rush that we feel is still there, but we know we are safe and because of it, we can enjoy the adrenaline and the fear that comes with it without the doomed feeling of knowing we are about to die, or worse. It gives us confidence.

Ana-Maria gives her opinion on this. “Stephen King, an American author known for his horror novels, suggested that we watch this kind of movies to help us deal with what is real and heal our negative emotions by watching these kinds of scenes. Aristotle pointed out that people were attracted to violent theatrical performances and horror stories because it gave them a chance to cleanse themselves of negative emotions. Thus, it seems that the phrase horror movies provide a safe environment in which to experience intense emotions is very often used.”

Ana-Maria continues, adding to the conversation studies she had read. “The main motivation, according to Professor Glenn Sparks, from Indiana, whose area of ​​study includes the emotional and cognitive effects of television, is how that person feels after the movie. From his studies, he found that subjects increase their breathing, pulse and blood pressure.”

According to the studies, Ana-Maria tells me that this physiological state can persist even after the movie is over. Thus, Professor Glenn Sparks assumed that any positive emotions experienced by that individual are intensified. We do not focus on the fear during the film but on the state of physiological activation, we have after. So we consider that we feel great and we will want to consume horror content even more.

This horror content lets us process things that could happen to us, but have not. And, it relaxes us in a twisted kind of way, and if that doesn’t tell you enough about us as human beings, I don’t know what will.